The Wakanda/Atlantis War Part 4.3: Catching Up With Namor

[This is Part 4 of a multiple post series going over the details of one of the most important moments in the Black Panther mythos: The Wakanda/Atlantis War.

In Part 4, we look at the immediate aftermath of the flooding of the Golden City by Namor. In 4.3, we catch-up with Namor.] 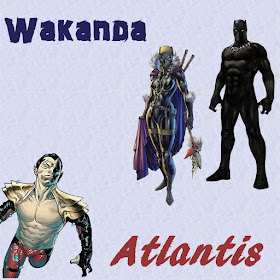 There was a surprise appearance of Namor in a Superior Spider-Man spin off that takes a look into his psyche post flooding. He actually shows a tiny bit of remorse that is quickly swallowed up by pride. Also take note that Spider-Man, in this case the villain Doc Ock, calls what he did "atrocities."

The other interesting thing in the issue is that another party is seemingly taking advantage of the conflict between Namor and Wakanda. 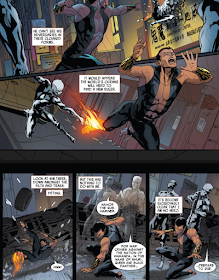 While it seems this was the HZ, it ended up being a misdirection. 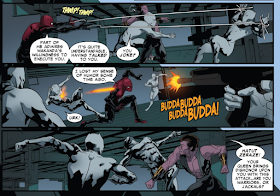 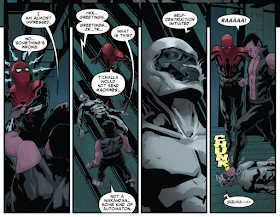 So, umm, who made the really realistic robots that almost killed Namor in the name of Wakanda?

Good question. I checked the next issue of the series and found nothing. I posted on various forums and found no answer. Was this mentioned ever again? I have no idea but I would love for someone to tell me.
Shadow at 11:51 AM
Share